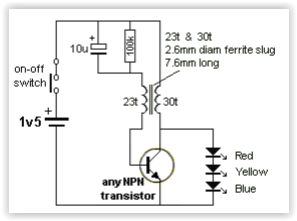 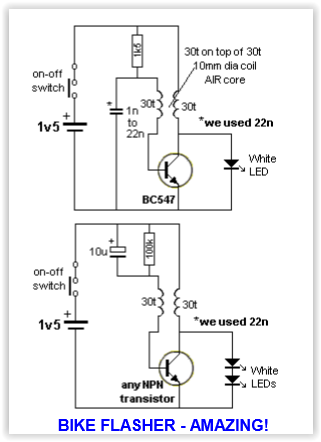 This bike flasher uses a single transistor to flash two white LEDs from a single cell. And it has no core for the transformer – just AIR! All Joule Thief circuits you have seen, use a ferrite rod or toroid (doughnut) core and the turns are wound on the ferrite material. But this circuit proves the collapsing magnetic flux produces an increased voltage, even when the core is AIR. The fact is this: When a magnetic filed collapses quickly, it produces a higher voltage in the opposite direction and in this case the magnetic field surrounding the coil is sufficient to produce the energy we need. Wind 30 turns on 10mm (1/2″ dia) pen or screwdriver and then another 30 turns on top. Build the first circuit and connect the wires. You can use 1 or two LEDs. If the circuit does not work, swap the wires going to the base. Now add the 10u electrolytic and 100k resistor (remove the 1k5). The circuit will now flash. You must use 2 LEDs for the flashing circuit.

The original 30 turns + 30 turns coil is shown on the right. The circuit took 20mA to illuminate two LEDs. The secret to getting the maximum energy from the coil (to flash the LEDs) is the maximum amount of air in the centre of the coil. Air cannot transfer a high magnetic flux (density) so we provide a large area (volume) of low flux (density) to provide the energy. The larger (20mm) coil reduced the current from 20mA to 11mA for the same brightness. This could be improved further but the coil gets too big. The two 30-turn windings must

be kept together because the flux from the main winding must cut the feedback winding to turn ON the transistor HARD. When the transistor starts to turn on via the 100k, it creates magnetic flux in the main winding that cuts the feedback winding and a positive voltage comes out the end connected to the base and a negative voltage comes out the end connected to the 100k and 10u. This turns the transistor ON more and it continues to turn ON until fully turned ON. At this point the magnetic flux is not expanding and the voltage does not appear in the feedback winding. During this time the 10u has charged and the voltage on the negative lead has dropped to a lower voltage than before. This effectively turns OFF the transistor and the current in the main winding ceases abruptly. The magnetic flux collapses and produces a voltage in the opposite direction that is higher than the supply and this is why the two LEDs illuminate. This also puts a voltage through the feedback winding that keeps the transistor OFF. When the magnetic flux has collapsed, the voltage on the negative lead of the 10u is so low that the transistor does not turn on. The 100k discharges the 10u and the voltage on the base rises to start the next cycle. You can see the 100k and 1k5 resistors and all the other parts in a “birds nest” (in the photo above), to allow easy experimenting. This is the first circuit you should build to flash a white LED from a single cell. It covers many features and shows how the efficiency of a LED increases when it is pulsed very briefly with a high current. The two coils form a TRANSFORMER and show how a collapsing magnetic field produces a high voltage (we use 6v of this high voltage). The 10u and 100k form a delay circuit to produce the flashing effect. You can now go to all the other Joule Thief circuits and see how they “missed the boat” by not experimenting fully to simply their circuits. That’s why a “birds nest” arrangement is essential to encourage experimenting. Note: Changing the turns to 40t for the main winding and 20t for the feedback (keeping the turns tightly wound together by winding wire around them) reduced the current to 89mA.

The circuit can be made small by using a ferrite slug 2.6mm diam x 7.6mm long. The inductance of this transformer is quite critical and the voltage across the LEDs must be over 6v for the circuit to work. It will not work with one or two LEDs. It needs THREE LEDs !!! If the author not not keep experimenting, he would have missed this amazing feature !!